For the past year, the Ambev brewery has been delivering beer and other beverages to restaurants and bars in São Paulo using a prototype of the electrically powered e-Delivery from Volkswagen Caminhões e Ônibus. A delivery run with a driver shows that the e-Delivery is ready to go mainstream—and that it offers the opportunity for zero-emission and sustainable local delivery transportation.

Anderson Soares de Campos wouldn’t mind driving off now in his delivery truck. He has just delivered a couple of crates of Corona beer and Guaraná soda to the Santo Cupido Bar, shut the metal roller doors on his truck, gotten in, and started the engine. But the two people standing right in front of his cab with their smartphones to their ears aren’t moving. He waits, then motions through the windscreen for them to move. Only when he lightly honks the horn, they startle, and run across the street. Anderson finds a gap in the heavy traffic and sneaks in. “This happens a lot,” explains the 39-year-old Brazilian, who has been delivering beer for the Ambev brewery for two years. For the past few weeks, he has been using the prototype of the e-Delivery, an electrically powered delivery truck from Volkswagen Caminhões e Ônibus, for his deliveries in São Paulo. “People don’t hear the engine; they can’t smell anything—they don’t even notice that I want to take off.”

We’re in the Itaim Bibi neighborhood, which is a lively area for going out at night and where people head to their offices during the day. All around Anderson are people in their cars stuck in morning traffic. They look on curiously at the beer delivery truck. “The first electric truck of the Americas, powered with 100% sustainably produced energy,” is printed on Anderson’s delivery truck. The names of both companies involved are prominently displayed next to it, “Volkswagen Caminhões e Ônibus” and “AMBEV,” the Brazilian subsidiary of the largest brewery group in the world, Anheuser-Busch InBev. 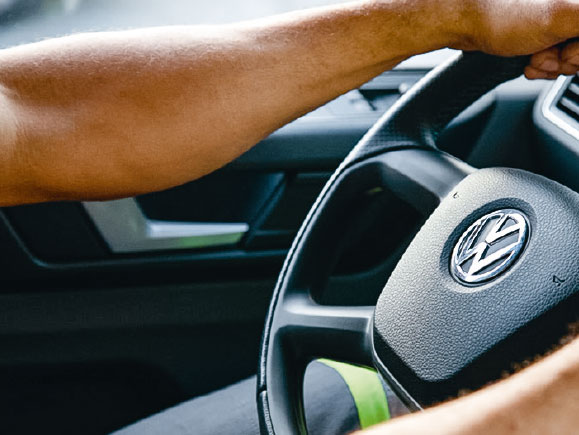 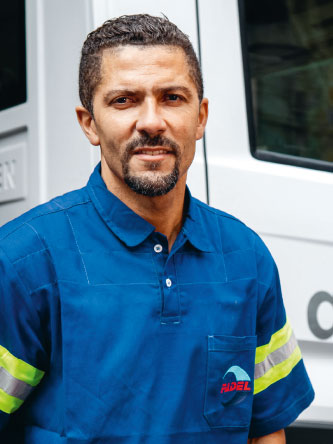 Anderson Soares de Campos has been delivering beer for the Ambev brewery for two years. 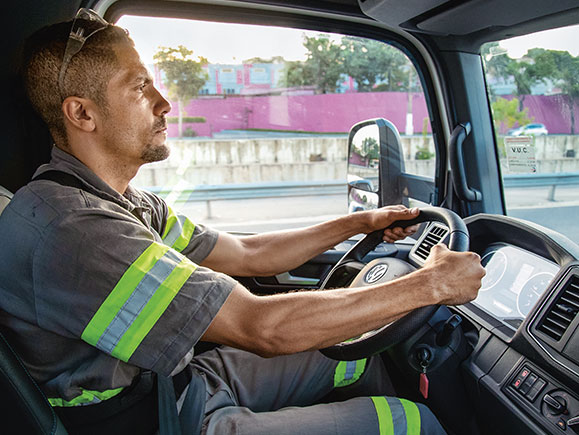 Anderson draws a lot of attention with the e-Delivery.

Volkswagen Caminhões e Ônibus continues to develop its Delivery model, launched on the market just two years ago, into an electric vehicle. The commercial vehicle manufacturer expects the light-duty commercial vehicle segment in Brazil to see the strongest growth in the future. The city delivery truck, with a gross vehicle weight of up to 14 tons, is used for delivery runs to retailers, restaurants, and food service businesses, as well as hospitals, schools, and public buildings. The growth in the delivery industry is also the result of rapidly growing e-commerce.

From its development phase, the new Delivery model was already designed with the intention of also being offered as an electric vehicle down the line. Anderson’s prototype is now being tested in Ambev’s day-to-day operations. The first e-Delivery trucks are set to roll off the assembly line as a production model at Volkswagen Caminhões e Ônibus in Resende, a city in the state of Rio de Janeiro, from the end of 2020. The brewery group has already announced the intention to purchase 1,600 electric vehicles—the world’s largest deal for electrically powered trucks.

Electric vehicles are particularly well-suited for urban deliveries, because relatively short distances are driven per delivery run. Anderson, for example, only drives about 50 kilometers a day in São Paulo. That distance is well below the range of the e-Delivery, which can travel up to 200 kilometers. Almost all of the roughly 6.5 tons of goods he loaded up this morning at a depot in the east of the city have been delivered—and the battery is still three-quarters full. Over the past year, the e-Delivery prototype has driven around 15,000 kilometers in engineering tests under real operating conditions, delivering Ambev’s products in the city of São Paulo.

“Previously, our focus was on sustainability in our production processes. Now we want to incorporate this into our supply chain.”

For Ambev, the e-Delivery is a key component of its sustainability strategy. By 2025, the parent company Anheuser-Busch InBev aims to reduce its CO2 emissions globally by 25%. To that end, a third of the fleet in Brazil is to be run on electric power in the future. Guilherme Gaia, Director for Sustainability and Supplies at Ambev, does not just see the electric trucks as electrically powered delivery vehicles. They also symbolize what the brewery group aims to represent going forward. “Previously, our focus was on sustainability in our production processes,” says Gaia. “Now we want to incorporate this into our supply chain.” In support of this goal, Ambev will produce its own energy with 31 solar power stations throughout Brazil—and plans to deliver this green energy right down to the very last mile. “We look at the improvement in the quality of life for the entire society,” says Gaia. “We are also working toward lower nitrogen oxide levels, fewer particulate emissions, and simply less noise in the cities.” The symbolism is also important to Gaia: “A Brazilian brewery group and Brazilian engineers from Volkswagen Caminhões e Ônibus are jointly developing the world’s first integrated concept for an electrically and sustainably powered delivery vehicle for the masses,” he says quite proudly. 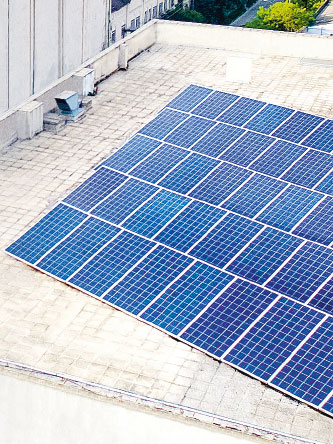 Ambev will produce its own energy with 31 solar power stations throughout Brazil.

São Paulo’s traffic is loud. Yet it seems even louder when driving in an electric truck. Anderson is still often stuck in congested traffic with all the other vehicles. But delivery companies hope to be able to make deliveries at night with quiet electric delivery trucks like the e-Delivery in the near future—something that is still not allowed because of the noise. Spreading deliveries over 24 hours would ease up traffic in big cities like São Paulo—because even though buildings have gotten bigger over the years, the roads have not. 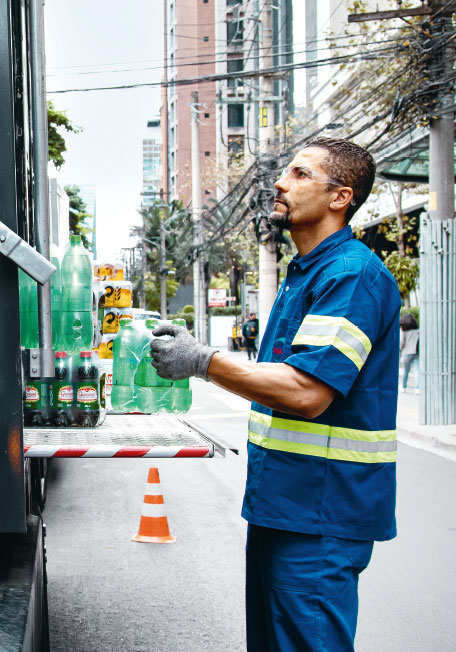 Anderson drives about 50 kilometers a day in São Paulo.

For the past 20 years, Volkswagen Caminhões e Ônibus and Ambev have been working together to develop vehicles that meet the needs of the brewery group exactly. “Our customers trust us,” says Roberto Cortes, CEO of Volkswagen Caminhões e Ônibus. He’s not worried about competitors from Asia who are also entering the Brazilian market. “When other suppliers want to enter the market, it’s rather a testament that we are on the right track,” says Cortes. “But we know the local conditions and our customers better.” As many as 50 other customers have also already expressed their interest in the e-Delivery.

Incidentally, the electric truck is also fun to drive, especially when the traffic congestion is over. Shortly after rush hour, the streets have emptied out and Anderson can pick up speed in the e-Deliver: 220 kilowatts of power and a peak torque of more than 2,000 newton-meters make sports-car levels of acceleration possible. Two young managers in a sports coupé are obviously impressed as they catch up to Anderson at a traffic light again. But he’s off already, delivering the next crates of beer.

Incidentally, the electric truck is also fun to drive—when the traffic congestion is over.