Initially developed for the gaming industry, virtual reality (VR) is now firmly rooted in today’s business environment. In the TRATON GROUP, VR is being advanced by clever team players who regularly meet and jointly work on solutions. Here’s a look at three places where virtual collaboration is taking place.

Jim Tolman slowly closes the virtual reality goggles in front of his eyes and, his hand still gripping with the haptic glove—a specialized glove for virtual reality—stops suddenly. What you don’t see observing this from the outside is that the human-computer interaction specialist has just picked up a virtual screwdriver. What at first sounds trivial, is actually a small technological sensation. The glove, fitted with sensors and small motors, can realistically simulate a gripping movement through feedback to the user. Now he cannot close his hand any further. “The glove extends virtual reality to the haptic level. This opens completely new avenues for collaboration,” explains Jim Tolman. In addition to simulating movements in assembly and when testing components, the glove is also beneficial for training. “A trainer can virtually explain new assembly processes or tools to his coworkers without actually being on site. That saves time and money,” says Tolman.

The haptic glove is one of the new technological innovations at Scania’s Smart Factory Lab in Södertälje. Virtual reality is just one thematic area at the lab; other applications include robotics and 3D printing. The team at the lab is working on the implementation of new technologies in the production system. To further this work, Scania collaborates with universities, other companies, and startups. “Innovations can’t always be taken over into practice directly. They have to be adapted and integrated—a job for researchers and inventors,” explains Franz A Waker, Manager of the Smart Factory Lab. The in-house lab, covering 450 square meters, provides the right high-tech equipment for this task—and plenty of creative leeway. “We can bring our ideas to the table,” says Waker. “In doing so, it is important to sometimes also test things in the lab playground using trial and error.” The Smart Factory Lab employees intend to invite colleagues from other brands within the TRATON GROUP to their lab playground in the future. “This will make our international team even more diverse and intensify the process of exchanging experience further,” says Waker, clearly already looking forward to it. 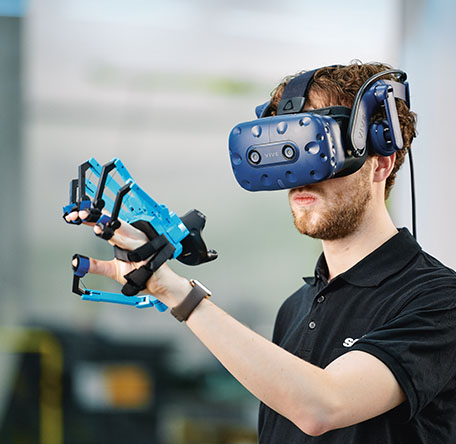 There is no real-life dragon waiting for engineers Martin Raichl and Erkan Celik in the 46-square-meter, dimmed CAVE. The CAVE is a virtual laboratory for MAN’s pre-series production in Munich. The high-tech creative den is set up with five high-performance computers, incorporating high-end graphics cards, infrared cameras, and stereo projectors with 2K image resolution for four large screens. Using this power, the experts can view the inner workings of a truck, a bus, or a van on a scale of 1:1. “What’s fascinating about this is that the commercial vehicle we are looking at here in 3D has not even been built yet,” explains Martin Raichl. The figurative dragons to be slayed in the CAVE are planning errors, which the experts detect before the first prototype is built. “This enables the upfront detection of as many as 50% of all possible defects,” says Raichl.

How does that work in practice? Martin Raichl and Erkan Celik enter the CAVE and find themselves in a world that sets an engineer’s heart racing: numerous components and wires—today these belong to a truck. Using 3D shutter glasses and a controller, they look at the truck from all sides, analyze it, and simulate assembly tasks. “Can you quickly check if the screw here will be easily accessible for the technician later?” Martin Raichl asks his colleague. Erkan Celik moves the component closer and rotates the virtual screwdriver. “Looks good,” he confirms. He then explains, “Together, we also test manufacturing processes upfront and ask ourselves: will assembly technicians be able to optimally carry out these processes later on?” What was previously done using 2D plans is now simply simulated and adapted. “In the CAVE, we work closely with colleagues from Production, Development, and After Sales—collaborating across different sites,” says Celik. Other MAN labs are located in Nuremberg, Steyr, Ankara, and Starachowice. 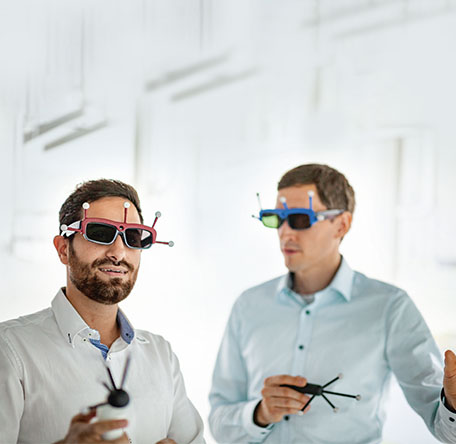 In the CAVE—MAN engineers Erkan Celik (left) and Martin Raichl on a fault-finding mission.

“Virtual reality is evolving at a rapid pace. If we fail to closely follow new developments, we will quickly fall behind. The exchange of knowledge between Scania and MAN and the brands’ collaboration are incredibly valuable.”

“Shall we just meet on the Scania Citywide?” Sven Gaedtke, a designer at MAN, sits in his office in Munich, virtual reality goggles in hand. His Scania design colleague, Jonas Forsberg, is 1,600 kilometers away in Södertälje. That’s why they meet on a city bus in virtual reality—or, rather, their avatars meet. The designers have been working together for several months on a proof of concept. They are investigating whether a joint MAN and Scania technical solution is feasible for using virtual reality in design. What tools are needed? What are the possibilities for collaboration? Today is the last meeting, with the proof of concept successfully completed. “Designers share an interest in seeing things as they really are. That’s why this collaboration made sense,” says Sven Gaedtke.

The key advantage of virtual reality is seeing things on a scale of 1:1. In addition, surface structures made from wood, metal, or plastic can be realistically replicated. And adjustments are made more quickly. Jonas Forsberg adds: “Virtual reality takes communication to a whole new level. I can see where Sven is pointing, where he is looking—watch his gestures. This creates a completely new kind of interaction and opens up new opportunities for collaboration.” The designers and the project are supported by a complete team from IT, Design, and Development. MAN IT expert Boris Koller is part of the core team. He is impressed with the cross-brand collaboration: “Virtual reality is evolving at a rapid pace. If we fail to closely follow new developments, we will quickly fall behind. The exchange of knowledge between Scania and MAN and the brands’ collaboration are incredibly valuable.”

Scania and MAN join forces to develop a new generation of engines.