The pilot phase of the eHighway in Hesse, Germany, is in full swing. A field trial is being conducted by authorities and scientists together with forwarding agents, companies, and Scania on a test track near Frankfurt am Main. Participants hope to determine whether electric charging by overhead line (pantograph) is an effective means of reducing CO2 emissions in freight transport. The initial results are encouraging.

It still amazes Christine Hemmel when the 40-ton truck glides silently across the yard. “Sometimes in the mornings I think: is our hybrid truck still here? But then I realize it has already quietly left the yard.” Together with her sister Kerstin Seibert, Christine Hemmel runs the Spedition Schanz freight forwarding company in Ober-Ramstadt, south of Frankfurt am Main. The two took over the family business from their father a few years ago, and are now working to shape the future of transportation, as proven by their participation in the catenary truck research project. The project is officially named ELISA, a German acronym for electrified, innovative heavy goods transport on the autobahn.

Back in May 2019, the two sisters received one of five Scania R 450 hybrid trucks as part of a tender process. The commercial vehicle manufacturer had equipped the trucks with a current collector system (catenary system) and made them available for the overhead line test track on the A5 autobahn south of Frankfurt am Main. The other four models with usable battery power of 7.4 kilowatt hours are being used by the pharmaceutical group Merck, the two logistics companies Meyer and Contargo, and the construction materials manufacturer Knauf Gips. 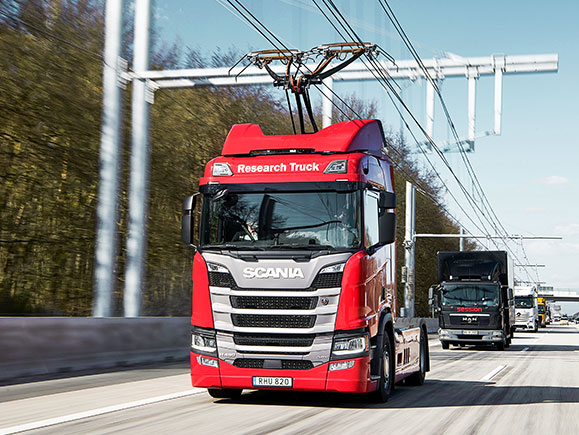 A Scania R 450 hybrid truck in operation, equipped with a current collector. Provided the collector is coupled with the overhead line, it can recharge the battery while also electrically powering the motor. 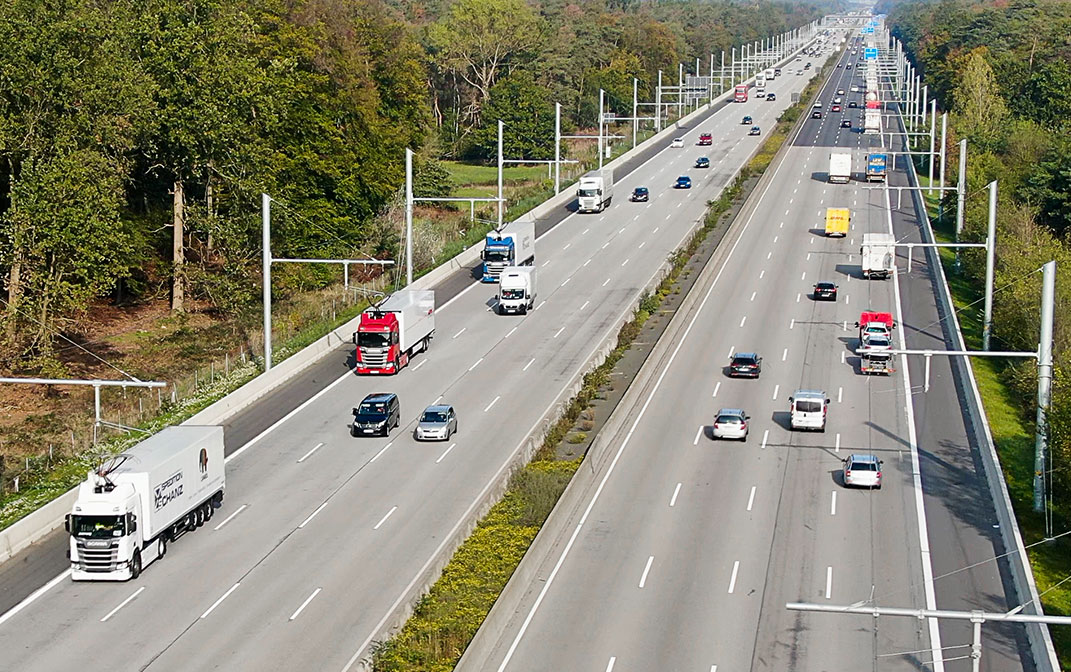 The A5 autobahn near Frankfurt, Germany: a site for testing the effectiveness of using overhead lines for charging to reduce the trucks’ CO2 emissions. Christine Hemmel is taking part in the field trials with her company, Spedition Schanz.

Spedition Schanz uses the test vehicle to transport the goods of a neighboring paint producer from its main location in Ober-Ramstadt to an external warehouse some 60 kilometers away in Frankfurt am Main. The truck travels back and forth along the route several times a day. “We can use the five-kilometer overhead line in both directions of travel on this route,” reports Hemmel. The truck operates in electric mode underneath the power line and charges its battery at the same time.

To extend the range of the battery, which takes over the power supply to the electric motor when the truck exits the overhead line section, the Scania hybrid truck recovers energy during braking in a process also known as recuperation. The limited battery capacity is not yet sufficient to complete the entire round trip in electric mode. “But we do manage a significant part of the route with zero local emissions,” says Hemmel and emphasizes: “What is interesting for us is that we can gain experience with electric drives and overhead lines in everyday use.”

Current collector extends at the press of a button

When the truck approaches the overhead line, the driver steers it to the right-hand lane with the aid of a lane assistant. A sensor on the vehicle detects the electrical power line and sends a message to the screen in the cockpit. The current collector then extends at the press of a button. Suddenly everything goes quiet: within seconds, the diesel engine stops and the electric motor takes over. Should it become necessary to change lanes, the current collector retracts again automatically with the aid of the sensor. All of this has long since become routine for Spedition Schanz. “Our drivers are doing great with it. Among other things, they really like the direct application of power during acceleration. And should minor problems arise, the Scania service department is on hand in nearby Offenbach,” says Christine Hemmel. 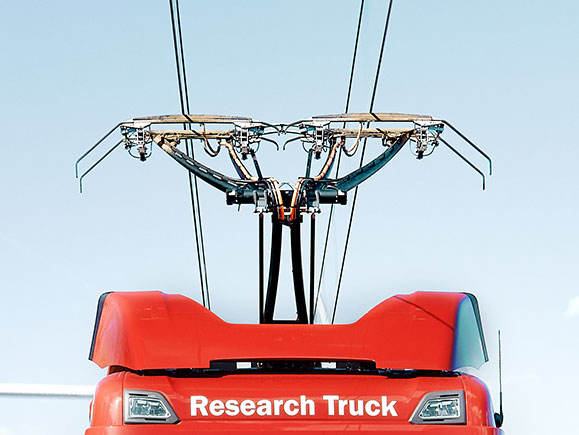 The current collector on the Scania R 450 truck extends at the press of a button to start charging the battery.

vehicles are on the eHighway every day.

The reason why it is worth testing overhead line technology and battery storage on the selected highway section, in particular, is explained by project manager Professor Gerd Riegelhuth from the state road authority Hessen Mobil, which operates the test track known as the “eHighway Hessen.” “Heavy-duty trucks account for ten percent of the traffic on this stretch of the route,” says Riegelhuth, “with an average daily traffic volume of 133,500 vehicles.” The average for the German autobahn network is just 52,000 vehicles. The high traffic density make this stretch ideal for the project. 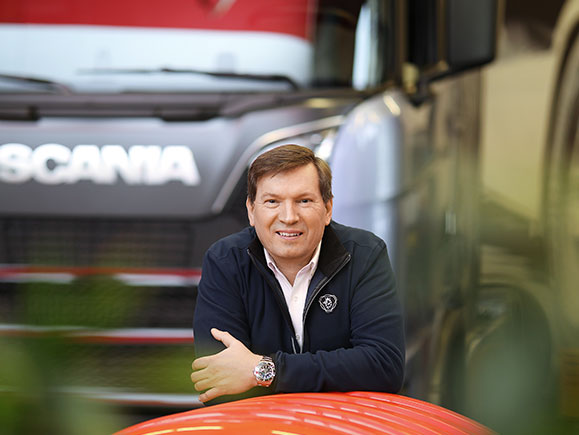 Stefan Ziegert, product manager for sustainable transport solutions at Scania, has already been involved with electric mobility since the 1990s.

Stefan Ziegert, an expert in the overhead line project at Scania, sees the opportunity “to reduce a diesel truck’s consumption by a quarter in a few years’ time — while using a technically very flexible system.” Ziegert works as a product manager for sustainable transport solutions at Scania Germany. He has been involved with electric mobility since the end of the 1990s, back when he sold the “exotic” Golf CitySTROMer electric model for Volkswagen. “Overhead line technology is already standardized internationally and has been used for many years in railway applications,” says Ziegert. “We are using a proven diesel engine and battery system in the vehicle. That means that all the required technologies already exist.”

From the point of view of Spedition Schanz, the system scores high marks especially when it comes to its practical ability to charge while driving, as Christine Hemmel sums up: “That means we can avoid breaks for charging.” And these breaks need to be avoided in daily logistics routines if they cannot be integrated into the rest periods that are necessary anyway — which is the case on short-haul routes, for instance, as traveled by Spedition Schanz.

“Overhead line technology is already standardized internationally and has been used for many years in railway applications.”

Three factors are critical for success

Whether the technology makes it from the test phase to an infrastructure project depends primarily on three factors. The first is the interaction between the overhead line technology and the battery. After every trip, the drivers record how well they managed to couple with the overhead line even in heavy traffic, and how long the battery charge lasted after that. “The data is important for two reasons,” says Stefan Ziegert. “We need it for traffic research, which is being conducted with the support of the Technical University (TU) of Darmstadt among others, but it’s also useful for Scania as a manufacturer. Ultimately, the hybrid trucks are still prototypes that we are constantly working to improve.” One question, for instance, is the size of the battery required to cover the largest possible number of electric driving applications in the given infrastructure. Because batteries have an ecological footprint too, the following guideline applies: as big as necessary, but as small as possible.

The second factor is economic efficiency. “Right now, the variable costs would be several times higher compared with diesel,” Scania expert Ziegert points out. But with advances in battery technology, as he anticipates, the vehicles would then become more economical. “I am firmly convinced that we will have a completely different ecosystem in terms of the battery cells over the course of the next decade. With greater capacity and faster charging, exciting developments are in store with this topic.”

The third factor is investments required by the public sector. According to a study by the German Federal Ministry for the Environment — which is financing the test section — an overhead line would only need to be installed on selected routes in Germany. If would suffice to electrify the most heavily used 4,000 kilometers of the almost 12,300 kilometers of autobahn. That’s because more than 60 percent of all ton kilometers driven on German highways can be attributed to precisely these sections.

E-roads in Sweden and Germany

During a research exchange in January 2017, German Chancellor Angela Merkel and Swedish Prime Minister Stefan Löfven met with representatives from Scania and Siemens in Stockholm. The result was three overhead line projects — something Scania refers to as “e-roads”: one on a section of the autobahn in Schleswig-Holstein, one on a federal highway in Baden-Württemberg, and the eHighway in Hesse. The test track, which is currently ten kilometers long and set to increase to a total of 17 kilometers from 2022 onward, is located on the A5 autobahn between Frankfurt and Darmstadt. Up to the end of 2022, vehicles and infrastructure will be tested here from a traffic- and energy-related perspective and with respect to ecological and economic aspects. The Federal Ministry for the Environment is supporting the field trial with just under €15 million. Scania is providing a total of 22 trucks for the three field trials.

Riegelhuth reports that the combination of hybrid trucks and overhead lines is also generating interest worldwide. “There have been discussions recently with delegations from Austria, Hungary, and the Netherlands. Guests from Italy, Brazil, and Taiwan have also already visited the eHighway in Hesse.” And this highway section is now being expanded further by Hessen Mobil with federal funding: the overhead line section will be extended by seven kilometers in the southern direction of travel by the end of 2022, thus more than doubling in size. A total of twelve kilometers of highway will then be electrified in the direction of Darmstadt and five kilometers in the direction of Frankfurt am Main. Scania will also provide seven new vehicles to a number of customers up to and including early 2022. This means that in the future, even more test trucks will cover an even longer highway distance with zero local emissions — and gather new insights with every kilometer.